Posted by Charulatha Mani Carnatic vocalist and Playback singer at 8:24 AM 2 comments:

While in London for my Isai Payanam concerts, I was interviewed by thamarai.com

Posted by Charulatha Mani Carnatic vocalist and Playback singer at 9:58 PM No comments: 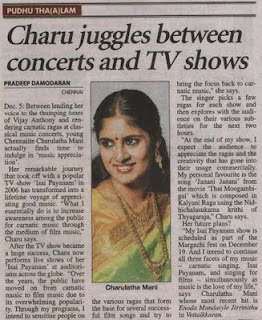 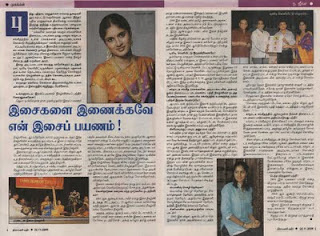 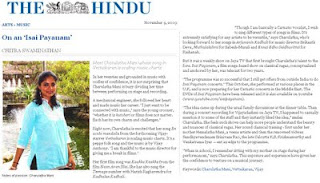 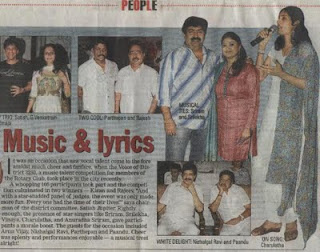 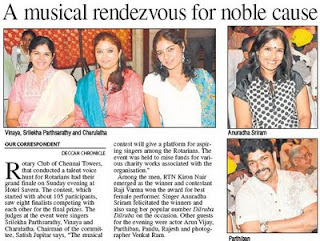 Posted by Charulatha Mani Carnatic vocalist and Playback singer at 10:14 AM 3 comments:

Last Sunday was an exciting day for me. The "En Uchi Mandaila" song I have sung in "Vettaikaran", Vijay's latest film, was premiered on Sun TV's telecast of the audio launch function. Krishna Iyer and myself performed this song before an audience of wild fans and stars of Tamil Cinema. I really enjoyed those moments on stage. It was more special because the music director Vijay Antony and actors Vijay and Anushka were looking on as we were performing.

I am preparing whole-heartedly for the December music season kutcheris, and hope to present my rasikas with memorable concerts this year as well. I will be shortly posting my entire schedule.
take care ...

CLM
Posted by Charulatha Mani Carnatic vocalist and Playback singer at 2:28 AM No comments:

Dear all,
Raga Payanam continues with Nattai raga which I have taken up for sharing with you all.... enjoy, any questions, please ask!!

A janya raga of Chalanata, Nattai is considered a very auspicious raga and signifies the beginning of any concert. It is a mangala raga, and most compositions in this raga are on Lord Vinayaka, the remover of all obstacles. It is a Ghana raga, and the first of Thyagaraja’s Pancharatnas is in this raga. It is also a Vivadi raga, i.e. some notes are placed at very close intervals, and hence an intoxicating effect is created in Chalanata and Nattai ragas. The Hindustani raga Jog closely resembles Nattai.


Film songs based in Nattai:

That's all for now, rest in next! - CLM
Posted by Charulatha Mani Carnatic vocalist and Playback singer at 8:20 PM 14 comments: 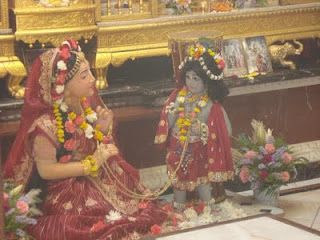 On November 1st, I performed a concert at the Hare Krishna Temple, Valmiki Nagar for Deepotsavam Festival, in which devotees offer lamps to the Lord. I was accompanied by Arunachala Karthik on Violin and Erode Nagaraj on Mridangam. A devotional experience. The songlist included Pallandu (Nattai), Bhavamulona (Suddha Dhanyasi), Sriman Narayana (Bowli), Enna Thavam (Kapi), Sri Madhava (Behag) and Balagopala (Bhairavi) was the main piece. I also presented Abhangs Theertha Vittala and Bhakthajana Vatsale to an enthusiastic audience. The miking and sound was excellent and the arrangements were hassle-free.

Audio excerpts from the concert:

Damodara is the representation of Krishna when he is tied to the mortar by his mother Yashoda for his lila-s. This month, the month of Kartika, Damodara is worshipped. He is Bhaktha-paradheena meaning he is enslaved by Bhakthi.