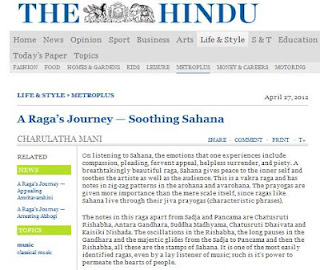 Posted by Charulatha Mani Carnatic vocalist and Playback singer at 7:43 AM 2 comments: 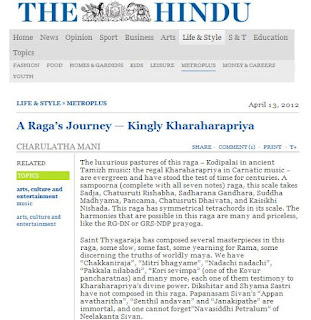 A Brief Guide to Raga Kharaharapriya: 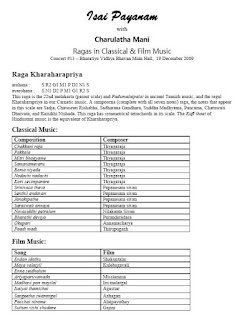 Angkor Wat is widely held to be the largest religious edifice in the world. More than a temple, it is in fact a "temple-city", with the massive structure enclose by a large outer perimeter, in turn surrounded by a moat. Suryavarman II (1112-1152) built it in honour of Vishnu.
The bas reliefs on the walls of the galleries are breathtaking for their scale and exquisite detail and artistry. Scenes depicted include Battle of Kurukshetra, Churning of the Sea of Milk, Vishnu conquering the Demons, Krishna and the Demon King, Battle of Lanka from the Ramayana, Heaven and Hell. The scene below depicts Vishnu's avatar of a giant turtle supporting Mount Mandala, which is churned using the serpent Vasuki coiled around it; the gods and demons pulling on either side.

The condemned in the various Hells depicted suffer gruesome tortures. This scene vividly depicts the Hell of Maharaurava, where victims are tied and nails are hammered into their bodies. Ouch ...! 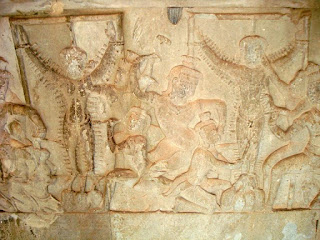 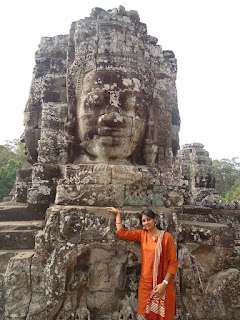 Bayon, with its temples studded with giant faces of Avalokitesvara, is the centrepiece of Angkor Thom, the city constructed by Jayavarman VII (1181-1219).

Bakong was built by Indravarman I. Dedicated to Shiva, it is a representation of Mt. Meru.
Visually handicapped musicians were seated outside the Bakong temple, playing on traditional instruments. 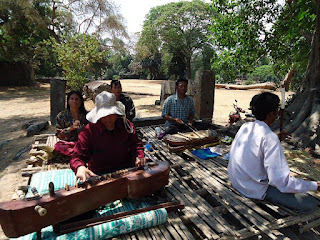 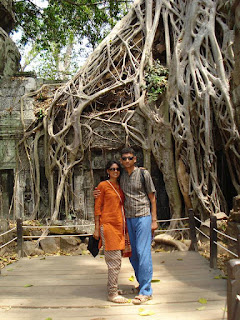 Ta Prohm is familiar to Angelina Jolie enthusiasts, as one of the locales in Tomb Raider. Here, the giant roots of silk cotton and strangler fig trees have swallowed the temple.
Posted by Charulatha Mani Carnatic vocalist and Playback singer at 5:10 AM 3 comments: