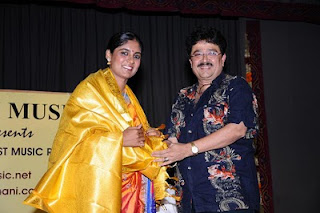 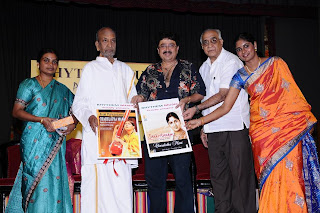 Sri Ramani said that Smt Charulatha Mani’s voice has a divine charm and that she has sung the Telugu songs with the correct pronunciation and devotional fervour. He blessed her for all her future endeavours. Sri S. Ve. Shekher spoke on the album contents and praised the artiste's effort in presenting such an album to the rasikas of music. He also complimented the recording quality and said that the “Isai Payanam – Live in UK” is a treat to Classical music and film music lovers.

Smt R. Amaravathy, Proprietrix, Rhythm Audio too spoke on the occasion and expressed her gratitude to the artiste and the guests.

The function was followed by Charulatha Mani’s “Sahitya Payanam” concert, in which she explained the meaning and background stories behind well-known classical kritis and then presented them in a concert form. She was accompanied by Sri Bombay Anand on the violin, and Sri Thillaisthanam Suryanarayanan on the mridangam. 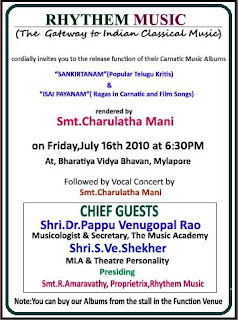 Posted by Charulatha Mani Carnatic vocalist and Playback singer at 10:59 AM 2 comments: 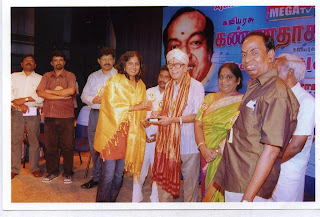 I was very happy to be the recipient of the "Kannadasan Award" for Best Playback Singer. Kannadasan is one of the most celebrated Tamil Film lyricists and his songs reflected simplicity and beauty coupled with intelligent usages of the language. He is hailed as "Kaviarasu" the king among poets. The songs of his tuned by M. S. Viswanathan and Ramamurthy are evergreen super-hits that always linger in the hearts of music lovers. I am a great fan of his songs and was thrilled to receive an award in his name, and that too from the veteran singer Sri P. B. Sreenivos!

His "Kalangalil Aval Vasantham" still lingers in my mind.

It was a nice evening at Rama Rao Kala Mantap, T. Nagar, and was covered by the Mega TV and organised by Ajanta Fine Arts.

Posted by Charulatha Mani Carnatic vocalist and Playback singer at 11:15 PM No comments: